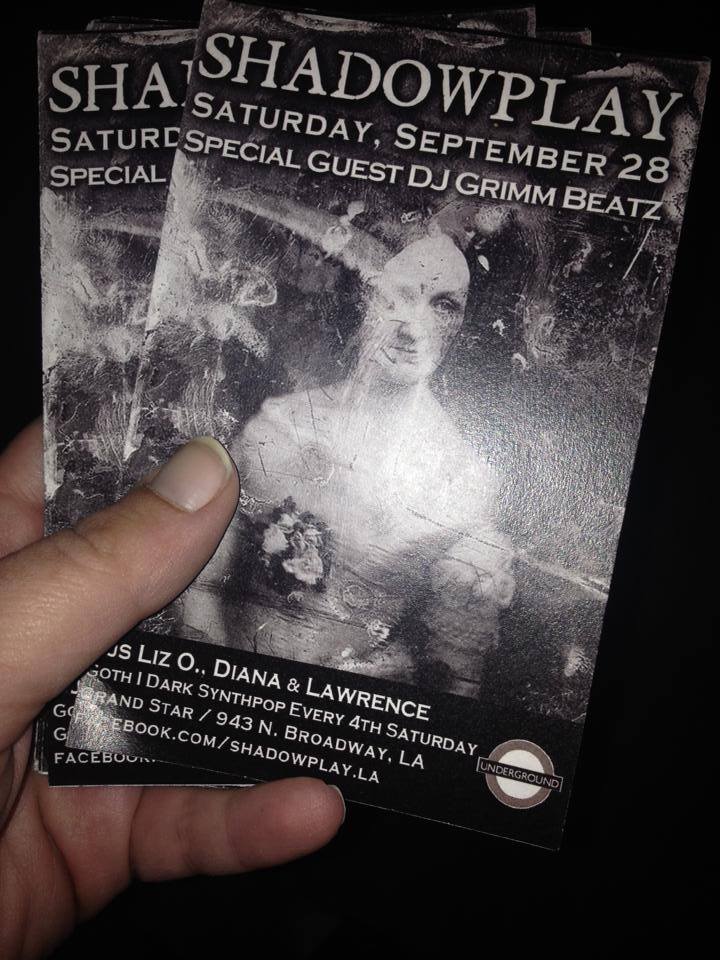 We still print up and pass out paper flyers. That sounds quaint, but it helps. Most of the people who take the flyer will never stop by the party, but you can say the same thing about Facebook invites. The benefit of IRL promotion is that you can actually gauge a reaction better than you can with a like on a status update. Anecdotally, I can tell you that when someone takes the flyer and expresses interest in the event, there’s a good chance you’ll see the person at the party.

I started DJing in the latter half of the 1990s. Internet promotion wasn’t even on anyone’s mind at the time. The big crews had street teams, tiny armies of young, hip kids who would stand outside of various clubs around the city and pass out flyers. Their job was to get you to go to the party. Even when there was a designated street team, though, a lot of the DJs and promoters would lend a hand. I usually had a box or two in my car. Mostly, I did the drop offs at record stores and head shops in the Valley. There were a lot of those back then. Sometimes, if there wasn’t anyone available to flyer outside an event, I would do it. When I promoted my own party, Transmission, I did the bulk of the flyering myself. I’ve spent a lot of time passing out tiny pieces of paper in front of clubs and concerts.

When you’re the kid in front of the venue with the flyers, you learn a lot about human interaction. Generally speaking, most will treat you with indifference. You’re just a dot in a long line of people trying to get something into their already full hands. You have to learn to be okay with people saying “No,” to you. You have to understand when they are purposely avoiding eye contact and leave it be.

You also have to learn how to deal with the people who treat you with scorn. There will be some who will give you an attitude. How dare you try to advertise something to them? They might take the flyer from your hand, crumble it up and throw it on the ground before they’re out of eyesight. You have to  fight that urge to mouth off to them. It’s hard. Trust me on that. I probably lost that battle a couple times. It’s a pointless battle to fight too. If they’re going to litter, do you want them at your party?

Online, you’ll never quite understand how many people don’t give a shit about what you’re doing. You don’t know if people are rolling their eyes when they read your tweets. You don’t know when they’re hiding your Facebook updates, or marking you as a spammer. On the streets of Los Angeles, after last call, you come to understand ambivalence and disdain. When you know this, you learn how to engage people.

Even in the biggest of crowds, you can sometimes catch attention. Maybe it’s because of something you’re wearing. When people like your shoes, they are more likely to pay attention to your message. I don’t know if that’s a fact. I just know that every time I get a compliment on my shoes– and that happens a lot– it turns into an awesome self-promotion opportunity.

Sometimes, you make a connection because the other person looks fierce. You like their haircut, band t-shirt, Doc Martens, etc. They like your handbag, earrings or whatever. You have a brief conversation that ends with, “I’m playing this party tomorrow night. Stop by.” They actually do stop by the party. Then they become regulars.

After a while, you understand the art of cultivating an audience. You can’t verbalize what it is that attracts you to certain people. Maybe you recognize them from somewhere else. Maybe they just seem nice enough to talk to you.  It’s a weird instinct that you didn’t have that first night in front of the club and it gets better with time. It’s something that you can only develop when you force yourself to stand in front of real people on a real street in a very big city and sell them your work. I don’t think any kind of social marketing tutorial can quite match that experience.