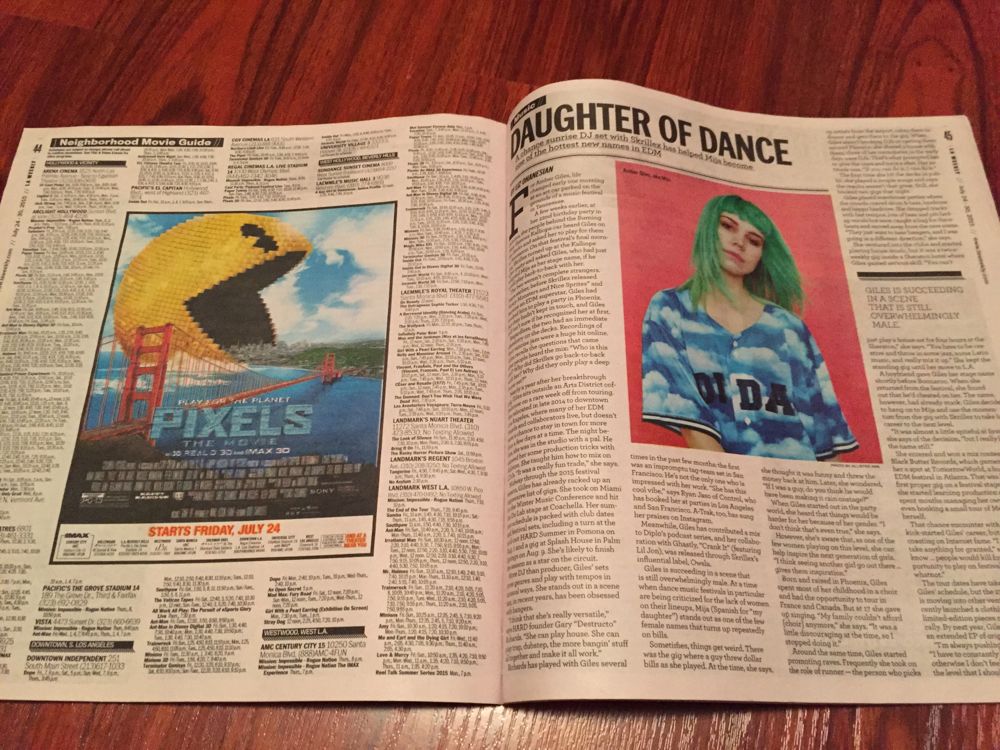 My profile of Mija is in this week’s print edition of L.A. Weekly.

This week was nearly all about the DJs. My profile of Mija, whose DJ career took off after an impromptu set with Skrillex last year, finally ran in the print edition of L.A. Weekly. This story was in the works for a while, so it’s nice to see it hit the streets. For those who would rather read online, you can do that too.

Mija wasn’t the only DJ I profiled recently. I also had the chance to hang out with Adam Auburn. You might recognize the L.A.-based DJ from his gigs at Exchange or King King, or his party Afternoon Delight at the Standard. You might also recognize him as a DJ at California Adventure’s Mad T Party.

When I started hitting up the clubs in the mid-1990s, Amanda Jones seemed to be playing everywhere. She actually got her start a few years earlier, when she was in high school. Today, she has two weekly residencies, amongst other gigs. It was a great pleasure to finally have the chance to interview her.

And then I got to DJ too. Hoseh of the Dublab show “Version Sounds” invited me to play a guest set earlier this week. This was a very special opportunity. Nearly 20 years ago, Hoseh hired me as a DJ at KXLU 88.9 FM, Loyola Marymount’s radio station. He likes to mention that no one wanted me to be a DJ because I was a weirdo goth, but he knew that I could do the job. I’m glad he did this because KXLU changed my life and I probably wouldn’t have the career that I do now if it weren’t for that. Hoseh, if you’re reading this, thanks for taking a chance on the goth chick.

It wasn’t all DJs this week. I did write about Xena: Warrior Princess or, what I would want to see in a Xena reboot, for Topless Robot.

“7 Things We Want to See in a Xena: Warrior Princess Reboot” (Topless Robot)

That’s it for now. I’ll be back with another update next week.

Thanks for reading and listening.