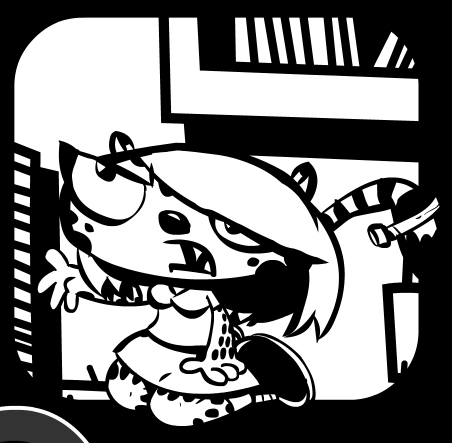 My pal Jeaux Janovsky and I co-created a comic called Los Animales. We’re releasing it as a webcomic next month in what will likely be daily installments. The comic surrounds a group of anthropomorphic animals who work at the last record store, video rental shop and comic book shop in Los Animales. I’m trying to keep the premise a little vague right now. It’s not what you might think it’s going to be. We’re actually more influenced by FLCL, Panty & Stocking with Garterbelt and Haruhi Suzumiya than slacker comedies, if that any indication of what’s to come.

Anyhow, Jeaux is inking the first chapter right now and we wanted to share this panel with you. The character’s name is Dani. She’s a snow leopard and works at her brother Kyle’s comic book shop. (Trivia: They’re named after pop stars. If you can guess which ones, then we probably already hang out together. Either that, or you’re Australian or British.)

Dani is the best friend of Manda (named for an indie pop hero of mine), our protagonist for Episode 1. She only makes a few appearances in the first chapter. You’ll learn a bit more about here in Episode 2 and probably a lot more in Chapter 3.

So here’s what we can tell you about the comic so far. It’s called Los Animales. We’re working on the website with an anticipated launch date of 2/14/13.  The comic is written in chapters that are a little more like episodes. I basically wrote each installment as a 22-page screenplay, which we then broke down into daily installments. The first chapter should take about 4-6 weeks to run its course, depending on how much we decided to run daily. Once that ends, we’ll head into the second chapter, which I’m revising for the gazillionth time right now, and so forth. There is an ongoing plot, actually more than one, driving the arc that I’ve been writing. That’s about 10 episodes, so we’ll have material for a while, you know, once it’s actually online.