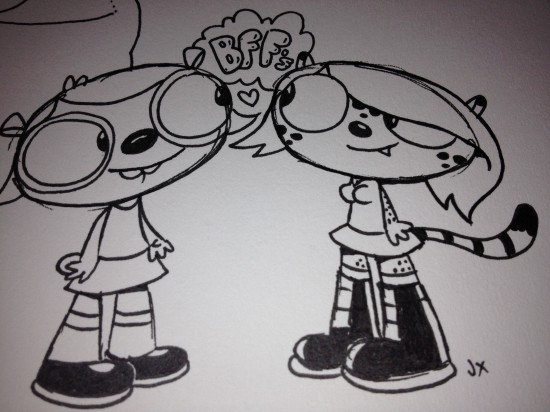 Manda and Dani from Los Animales. Art by Jeaux Janovsky.

Here’s a quick sketch of Manda and Dani that Jeaux did this morning over a breakfast meeting at Denny’s in Reseda. This is our second Denny’s meeting in the past six weeks. The first one was in Granada Hills. I’m starting to think we should just hit up every Denny’s in the Valley. Jeaux thinks we come up with our best ideas there. I think he’s right. Fueled by Moons Over My Hammy and coffee.

I really like what Jeaux did with Dani. It’s kind of like he read my mind. Dani is intended to be Manda’s much cuter friend, the one guys hit on before she mouths off and they move on to Manda. She’s kind of an amalgamation of all of my female friends, every one of whom got hit on before me at the clubs.

Dani’s really energetic and good-natured, though she can be pretty mouthy and has a knack for making awkward situations worse. Manda is surly and bossy. She also has perfectionist tendencies. She bites her lip and rolls her eyes. She may or may not be based on the person who wrote this blog post.

Short a in Animales, pretend the e at the end is an i.

I’ve been fascinated with accents and cadence for as long as I can remember. I’m trying to teach myself how to best convey the intricacies of speech in word bubbles without messing  with spelling. I can hear the characters when I write and I want you to hear the same thing. It’s a tricky thing to do, but it’s getting easier to do as I get further into rewriting the second chapter. We’ll see how it goes.